Featured on Radio Derby on August 10.

“Life is really what you make of it and going on a big adventure is something I really want to do and do something great with it.”

Barney Lee could potentially become the youngest person to walk around the coastline of mainland Britain. What makes this plucky 19-year-old even more unique, is that he walks with purpose, raising awareness about a “life-changing” condition called hereditary neuropathy with liability to pressure palsies (HNPP) – something he suffers from himself.

The Derby teenager commenced his 4,500 mile walk on August 10 from Mablethorpe in Lincolnshire, in a bid to try to fund further research and possible treatment for this little-known degenerative neuromuscular disorder through donations and sponsorship.

Ahead of the walk, the Littleover adventurer consulted with the Wayne State University Neurology Department Chair in Michigan, Dr Jun Li. He says: “He seemed positive about the ambition of it but he had concerns about the potential side effects and things to do with HNPP with my body.”

The three factors he has been told to watch out for are doing repetitive movements for a prolonged period of time, stretching excessively, and limit staying in the same position for too long. Unfortunately for Lee, walking clearly consists of the former. He says: “I can alter [my walking] so I can do less in the day and have rest days, I can also walk in a different style – just think of [Monty Python’s] Ministry of Silly Walks with John Cleese going down the coast!”

While Lee is no stranger to the great outdoors, having climbed five of the highest peaks across the UK and Ireland, some of the symptoms he has already experienced are hand and arm numbness, loss of grip, as well as some strain on his legs. However, it has not stopped him from undertaking this huge feat.

He says: “[Realistically] some kind of damage will happen which is irreparable, but that’s kind of part of the sacrifice of it, to get it out there and potentially make a difference”.

The rare genetic illness has however, stopped him from going to the gym with his friends, as well as choosing a career path of his own.

“I have noticed that’s it gotten progressively worse if I compare myself to a year ago, things aren’t working as good.”

The plumber, who had also trained to become a handyman and landscape gardener, says that the condition has inhibited him in considerable ways.

“It felt like I had ten pairs of gloves on my hand and I just couldn’t move them,” he says about  how he felt the day after digging a garden during landscaping job, adding that career-wise, it would be a “bad idea” in the long and short-term, in regards to the impact on his body.

Officially diagnosed only several months ago, but knowing about the condition through his mother’s own debilitating experience with it, the hiker says he avoided getting tested because he “did not want the label”. 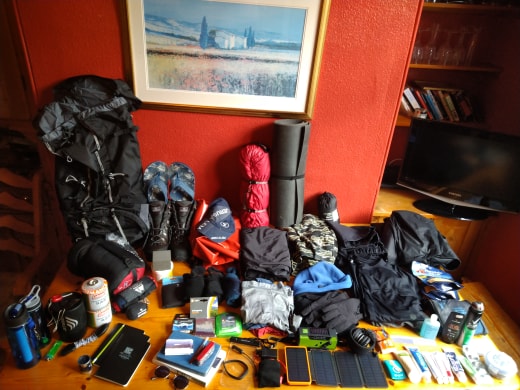 Hence the avid traveller is embarking on this journey to “generally put [the condition] in people’s minds”, and hopes that by alerting individuals to the disorder, more will notice their own symptoms, and therefore push medical companies to conduct clinical trials. With currently only 2 to 5 per 100,000 individuals diagnosed with it, Lee is certain that there are far more affected than currently recognised.

“The doctors and experts think that it’s more like 1 in 2500 people because of misdiagnosis. And the only way we can change this is by doctors more aware of this so they are able to diagnose correctly and know about the condition,” he says.

And Lee hopes that during his trip, he will be able to “hit all the nails on the head” after Dr Li, a leading researcher of HNPP, helped him find a way of channelling his initiative by recording his symptoms and movements in a medical journal, as part of a study to share with his team.

“The only way I can change my fate and other people’s fates is doing something positive like doing this walk and raising awareness.”

“My hope is that in my lifetime I’ll have played a part or a role in bringing about a change which will help potentially me, and definitely the next generation, my kids and things like that will help them out.”

And walking around the coastline appears to mean much more to Lee than a fun (but gruelling) way to raise funds, stating that he sees the campaign as a “parallel” to how people experience the condition.

“It can be a long hard struggle and it’s something that goes on forever until some kind of cure. So I’m trying to mimic that in some way to try represent what the condition is about […] you have good days and bad days.”

The rambler is also hoping to have friends, family and other walkers join him throughout the 14 month trip, as well as offers of basic amenities such as accommodation and showers. Fellow HNPP suffers have also lent a hand by providing beds throughout the adventure.

Lee, who sees the possibility of writing a book about his tour, says: “It’s just really amazing how people have got behind it, I’m really looking forward to it and what it brings and how I change and develop as a person from it, and potential amazing new friends and amazing stories to tell.”

There are lots of ways to get involved – find up to date information on Lee’s Facebook page or follow him on Instagram. And check out his journey progress at Barney Lee: My Long Walk Around Britain. To donate towards Lee’s trip or to HNPP research directly visit his page here.

One thought on “Profile: Barney Lee journeys around Britain’s coastline for HNPP awareness”